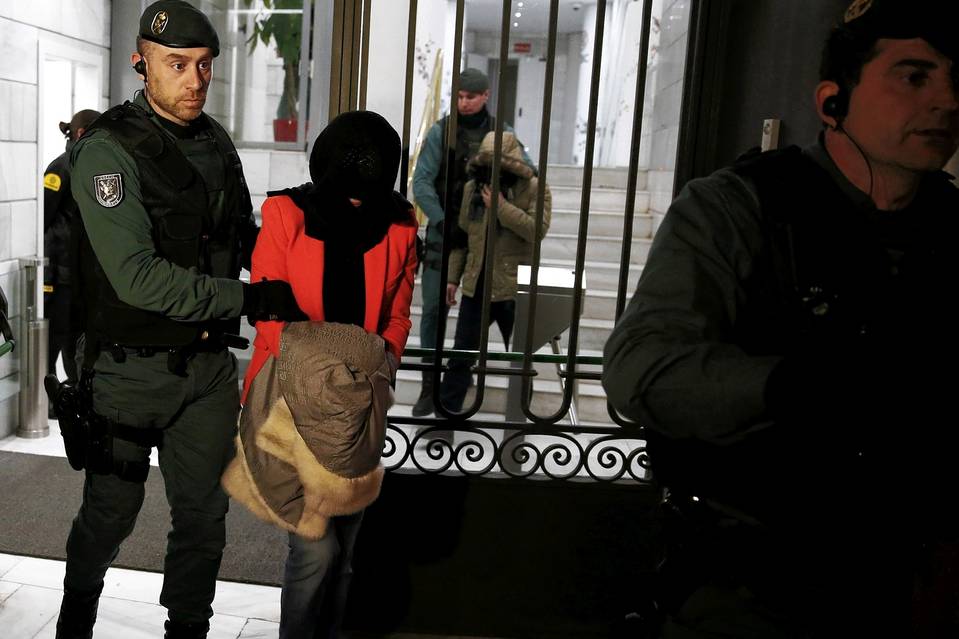 ENLARGE
Suspects are led away by Spanish Civil Guard officers as they leave the headquarters of Industrial and Commercial Bank of China during a raid in Madrid on Wednesday. PHOTO: JUAN MEDINA/REUTERS
By
JEANNETTE NEUMANN
Updated Feb. 20, 2016 6:44 a.m. ET
3 COMMENTS

MADRID—Three of the six detained employees of Industrial & Commercial Bank of China Ltd.’s headquarters in Spain are being held without bail, and a judge ordered the other three to be held on a €100,000 ($111,300) bail, Madrid’s top court said in a statement on Saturday.

Spanish authorities detained five of the directors of China’s largest state-owned bank by assets in Spain on Wednesday in Madrid in an investigation known as “Operation Shadow.” Madrid’s top court said on Friday that a sixth worker had also been detained.

Spanish and European law-enforcement officials are probing the Chinese bank’s Spanish unit in the alleged laundering of deposits from suspected criminal organizations.

ICBC, in a statement issued by its headquarters in Beijing earlier this week, said that abiding by anti-money-laundering rules is “a basic business principle” of the bank and that its “Madrid branch is actively cooperating with the investigation.”

The six detainees began to give their depositions in a court in Parla, a city about a half an hour south of Madrid, at 1.30 p.m. local time on Friday. They finished at 3.15 a.m., Madrid’s top court said in the statement. The ICBC employees gave their testimony “in the presence of an interpreter,” the statement said.

Wednesday’s raid of ICBC’s Madrid headquarters builds on an earlier investigation in Spain in May 2015 known as “Operation Snake,” which dismantled an alleged Chinese criminal network that authorities suspected of importing goods from China to Spain without declaring them on customs forms to avoid paying taxes.

As Spanish authorities continued their investigation after the May 2015 raid, they discovered that other Chinese and Spanish criminal groups also had allegedly been using ICBC’s unit in Spain to transfer money earned from smuggling, tax fraud and exploitative labor practices to China.

Law-enforcement and judicial authorities haven’t provided details on the identities of the six ICBC branch workers who were detained.

The case has been closely followed in China.

China’s Foreign Ministry spokesman Hong Lei on Thursday urged Spain to protect the interests of Chinese companies in Spain. “We hope the Spanish side will deal with the relevant issue in accordance with the law and in a just manner,” Mr. Hong said.

ICBC is China’s largest state-owned bank by assets. It has been aggressively expanding its footprint in foreign markets in recent years and its operations now span the Americas, Europe, the Middle East and Asia.

The Chinese government has been encouraging the country’s state banks to raise their profiles overseas, as a way to showcase the country’s rising commercial prowess and to diversify its foreign-exchange reserves.

Foreign-exchange trading, cross-border trade settlement and lending to acquisitive Chinese companies have been the main focus for ICBC’s overseas operations. Still, like other big Chinese lenders, the bank remains dependent on domestic business for the bulk of its profits.

Madrid’s top court said on Friday that despite the raid in Madrid, ICBC remains in operation.

—Lingling Wei and Brian Spegele also contributed to this article.

Write to Jeannette Neumann at jeannette.neumann@wsj.com