THESE ARE THE WORLD'S LEAST CORRUPT NATIONS

Countries with low levels of corruption could still be "exporting" it overseas, according to Transparency International’s latest report.

The study suggests that even the cleanest European nations might be linked to corruption abroad, for example by failing to tackle bribery by their companies in other countries.

No country is corruption-free, with José Ugaz, Chair of Transparency International, saying: “The 2015 Corruption Perceptions Index clearly shows that corruption remains a blight around the world.”

The report outlines the perceived levels of public-sector corruption. Dark red indicates high corruption, while yellow showing countries are perceived as being cleaner - but not corruption-free.

The exporting of corruption

The report’s authors argue that in contrast to their squeaky-clean image, many European nations are exporting corruption elsewhere.

Despite clean domestic public sectors, some nations have been linked to corruption abroad. Transparency International highlights a firm 37% owned by the Swedish state facing allegations of bribery in Uzbekistan.

Half of OECD nations are also failing in their obligations to crack down on bribery. The OECD Convention on Combating Foreign Bribery is still being inadequately enforced, researchers found last year. 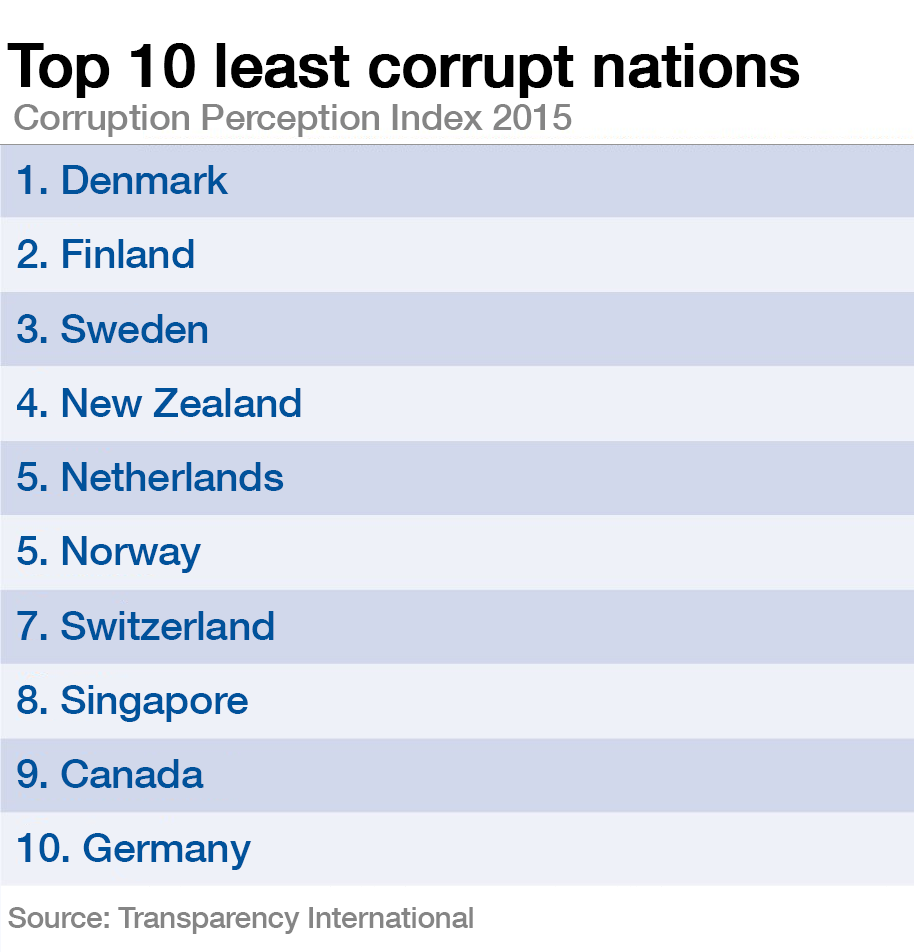 The lowest scorers demonstrate a familiar pattern of conflict, inequality and poverty. Half of the world’s 10 most corrupt nations also scored poorly on 2015’sGlobal Peace Index.

The World Economic Forum’s Global Competitiveness Report 2015-2016highlights corruption as a significant factor in preventing business activity in emerging and developing economies. Tackling corruption is central to breaking this cycle of poverty and inequality.

Is there any good news?

Actually, yes. More countries improved their score last year than declined. Greece, Senegal and the United Kingdom in particular have all made significant progress since 2012.

The year 2015 also saw a year of protest against corruption. José Ugaz argues: “People across the globe sent a strong signal to those in power: it is time to tackle grand corruption.”

Progress has been made, then, but there’s still a long way to go.