The IMF will vote on Monday whether to include the yuan, also known as the renminbi), as the fifth member of its special drawing rights currency basket. Photograph: Tao Ye/Xinhua Press/Corbis

China’s efforts to make the yuan an international currency on a par with the US dollar is to receive a fillip with the International Monetary Fund widely expected to add it to a special basket of global currencies.

Analysts say the shareholders in the Washington-based IMF will vote on Monday to include the yuan, also known as the renminbi, as the fifth member of its special drawing rights currency basket alongside the dollar, the Japanese yen, sterling and the euro.

China has been lobbying for the IMF to add the yuan to its basket of reserve currencies, which it uses to lend to sovereign borrowers. A vote to include the currency in the SDR basket would mark a significant milestone for Beijing, according to experts. 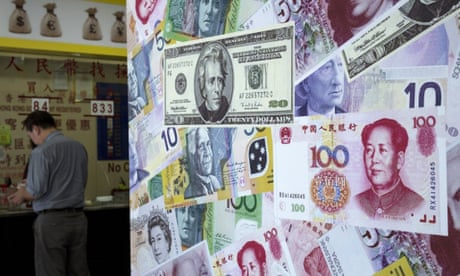 “The direct impact won’t be felt in the near term, not least because implementation of the new basket won’t be until Q3 2016. However the symbolic importance cannot be overlooked,” said Andrew Malcolm, Asia head of capital markets at law firm Linklaters.

“By effectively endorsing the renminbi as a freely useable currency, it sends a strong signal about China’s importance in the global financial markets.”

The vote of confidence in the yuan as a world reserve currency will come as welcome relief to Chinese authorities as they seek to allay investor fears aboutChina’s economy and turmoil in its stock markets.

Beijing has long hoped the yuan would be added to the small list of currencies in which member-countries’ claims on the IMF are denominated. China hopes this stamp of approval will increase the yuan’s desirability as a reserve currency for investors and undermine the hegemony of the dollar as a global reserve currency.

Shares in China had soared 150% in the 12 months to mid-June this year as individual investors piled into the rising market, often borrowing heavily to do so. But stocks tumbled over the summer, despite a series of measures by officials in Beijing aimed at calming market jitters. There was another slump in stock markets last week as regulators appeared to clamp down further on leveraged buying.

Amid the summer turmoil, Beijing’s surprise devaluation of the yuan was seen partly as a move towards allowing the market, instead of the government, to fix the the currency’s value, an important precondition for inclusion in the SDR basket.

The credit ratings agency Fitch was among those predicting the IMF executive board would opt to include the yuan in the basket of elite currencies. It wrote in an update on China last week that the yuan was expected to see widespread adoption as a reserve currency globally.

On the expected IMF move, the ratings agency said: “Fitch does not expect this to lead to a material shift in demand for renminbi assets globally in the short term. Over time, the emergence of the renminbi as a global reserve currency could support the credit profile.”

Analysts at the Japanese bank Nomura predicted that the yuan will become one of the top three major international currencies – a peer to the US dollar and the euro – by 2030. They estimate the yuan will make up 10% of the IMF’s SDR basket.