Anti-money laundering infractions cost U.S. brokerage firms the most in enforcement settlements in 2017, a year of overall declines in penalties at the Financial Industry Regulatory Authority, according to a law-firm's analysis. For the first time, email-related cases in 2017 joined the top ranks in an annual report on FINRA actions.

Total sanctions declined to $150 million in 2017 from the record $207 million levied in 2016 by FINRA, the brokerage industry's self-regulatory agency.

It also marked the first year of President Donald Trump's administration, which has sought to free banks and brokers from onerous regulation and favored a shift away from the aggressive enforcement against firms and to a stronger focus on Main Street fraudsters. FINRA is regulated by the U.S. Securities and Exchange Commission, whose influence over the self-regulator comes from both direct oversight and coordinated enforcement.

“We may be seeing ‘kinder and gentler’ regulators,” said Brian Rubin, who heads Eversheds’ Washington office litigation and regulatory practice, in comments to Regulatory Intelligence.

Top Items: Year past and year ahead

The shift is unlikely to be dramatic, said Rubin, a former deputy counsel for enforcement at FINRA and the SEC. Although both securities regulators “have signaled a more cooperative approach in dealing with member firms, they are still trying to root out bad actors in the industry and protect Main Street investors.” FINRA has shown no indication it will relax its pursuit of violations, he added. The 2017 decline came from a record level in 2016. More cases may be seen this year based on a number of factors.

The biggest areas of enforcement in the 2017 Eversheds Report were, in descending order:

“Last year, FINRA’s fines predictably decreased after 2016’s record-setting year, but the amount of restitution ordered increased, demonstrating that FINRA is interested in getting money back into the pockets of investors,” said Mr. Rubin. “FINRA addressed an array of topics in 2017, continuing its focus on anti-money laundering, while also pursuing more ‘nuts and bolts’ issues like trade reporting, record retention, and supervisory policies and procedures.”

The chart below displays FINRA’s fines and the number of disciplinary actions during each of the past 10 years:

The chart below displays the restitution FINRA reported during each of the past 10 years: 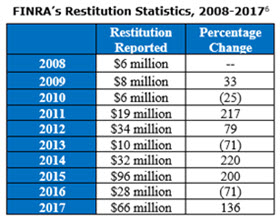 2 The number of disciplinary actions has been identified by searching FINRA’s Disciplinary Actions Online database because FINRA has not yet published its annual report or updated its “Statistics” webpage.

7 Because cases may involve more than one alleged violation (e.g., trade reporting and books and records), a case may be included in more than one category in this analysis.