Lebanon's politics might be in a mess but the country's central bank is determined to maintain the country's financial stability, its governor told CNBC, and to make sure U.S. sanctions are implemented against the supporters of militant political group Hezbollah,

Speaking to CNBC in Beirut, Central Bank Governor Riad Salameh said that his central bank was battling to maintain monetary stability amid political divisions within the country – which has not had a president for over two years – and wider unrest in the Middle East. Lebanon has also had to contend with a massive influx of 1.1 million refugees from war-torn Syria – a huge burden on a country with just 4.4 million inhabitants.

"The problem is that we have a deadlock and it seems that the Lebanese political class can't solve it. Usually they rely on external intervention but obviously there is also deadlock on the level of the region and the only interest of the international community in Lebanon is that Lebanon is receiving Syrians and to make sure that those Syrians are kept in Lebanon and not thrown out," Salameh said.

Political disunity and sectarianism in Lebanon has meant that the country has had no president for two years – and no parliamentary elections can take place without a president. The last parliament was elected in 2009 and another election is now not expected until 2017.

The next presidential election is due on June 23 yet it will be the 40th attempt to elect a (largely ceremonial) leader, one Lebanese newspaper noted. Salameh said that there had been no international help to solve the political deadlock.

"Unfortunately, structurally, we are in deadlock, that's why we cannot elect a president and that's why the coalition government has to act very prudently because it is the only constitutional institution working now. The parliament is not meeting and we don't have a president so as a central bank we have to try to cope with these vulnerabilities and try to maintain stability in the currency," Salameh warned. 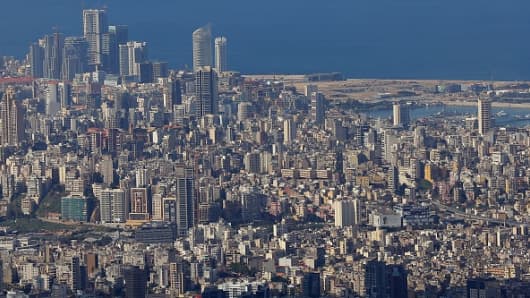 Maintaining the Lebanese pound's value against the U.S. dollar was important as it had an impact on the flow of remittances back to the country, he said, which represented 20 percent of the country's gross domestic product and were "fundamental to the funding of the private and public sector."

"The stability in monetary policy is essential and we have to implement that in an environment that is not really ideal. The instability in the region affects us as our export markets are disrupted, we have refugees other than the Syrians coming from Iraq and Palestine and the labor market in the country is witnessing competition that is negatively impacting on the Lebanese themselves," he said.

Despite its political woes, Lebanon has remained relatively stable considering the civil war being waged in neighboring Syria.

It is no stranger to sectarianism, however, being the focal point of a proxy war between Israel and Shia-dominated Iran, which is widely seen as the source of funding and ideological support for Hezbollah, a powerful Islamist militant and political group that was created in the mid-1980s to counter an Israeli invasion of South Lebanon.

Hezbollah is often seen as a "state within a state" in Lebanon and remains popular with the country's Shia community despite its destabilizing effect on an already disjointed political scene.

In December, the U.S. passed a law (called the Hezbollah International Financing Prevention Act, or HIFPA) that threatens to sanction anyone who finances Hezbollah. The act has caused tensions between Hezbollah and the central bank to rise, Reuters reported in May, but Salameh appeared sanguine and said that the central bank was working to implement the law. He said that 100 Hezbollah-related accounts had already been frozen.

"Our priority is to keep Lebanon on the international financial map so we have taken a resolution that we will implement that U.S. law in Lebanon and we have put in place a structure to do it to satisfy the objectives of that law and at the same time preserve the rights of the Shi'ites to have access to the banks," he said.

On a wider level, it was crucial for Lebanon to adhere to international financial practices, he said, to improve its credibility in international markets. "The more you improve your reputation the more funds you get that are serious, we don't want illegal funds in our system. We don't want a few Lebanese to spoil the image of the country or the financial markets in Lebanon," he said.