The map of the world that shows every country's major export

The map also reveals which countries suffer when there is a drop in the price of certain exports.

The fall in oil revenues has wreaked havoc in countries coloured navy blue, where the dominant export it oi BAML

Cars from Canada, oil from Russia and computers from Ireland: these are just some of the biggest exports from countries around the world.

Bank of America Merrill Lynch has put out a map that shows the biggest exports around the world. Some are obvious, like coffee from Guatemala or electronic goods from China.

The map also reveals which countries suffer when there is a drop in the price of certain exports.

For example, the fall in oil revenues has wreaked havoc in countries coloured navy blue, where the dominant export it oil. 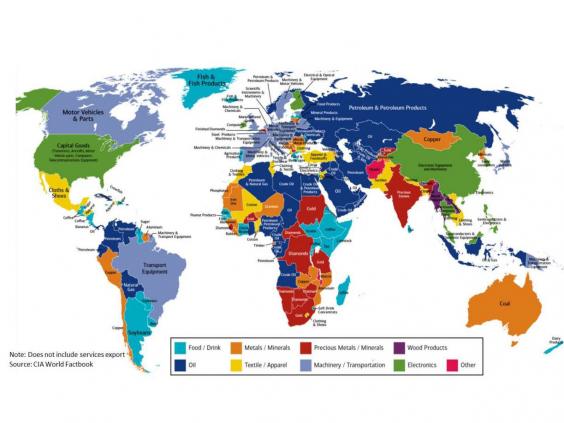 Click HERE for larger annotated version of the graphic

Saudi Arabia is seeking $6-8 billion in loans from international lenders and cutting public spendings and local subsidies to try and close the $100 billion deficit that opened up in its finances in 2015.

The 300 largest global oil and gas companies have witnessed their stock market value falling $2.3 trillion, or 39 per cent, since the oil price began to slide in the summer of 2014.

But transport sector companies and car markers, marked in a paler blue on the map, may benefit from falling oil prices as petrol gets cheaper and people decide to invest in cars.

Netflix is worth around $40 billion, McDonald's is worth $109 billion and Google and Amazon combined are worth $747 biliion.

You may already know that these companies are worth billions, but it can be hard to give context to such big sums.

But Bank of America Merrill Lynch has come up with a solution to illustrate exactly what the value of some companies looks like, by comparing big company valuations with the stock markets of some countries. 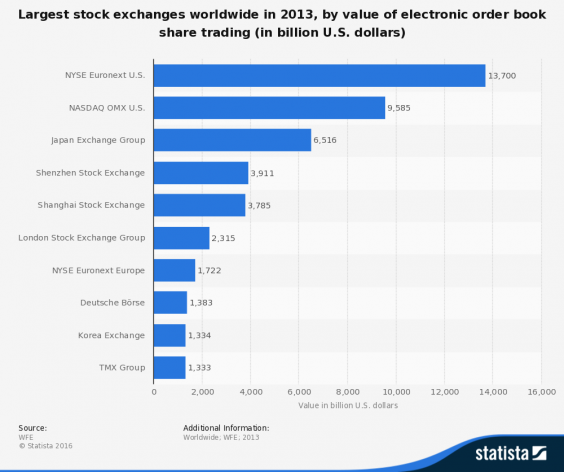 Most of these companies are listed on the New York Stock Exchange, which makes NYSE multiples more than the value of many of the other exchanges around the world.

It has been a difficult year for stock market investors around the world as many, panicked by reports of slowing economic growth in China, sold off stocks and took their money out of US funds.